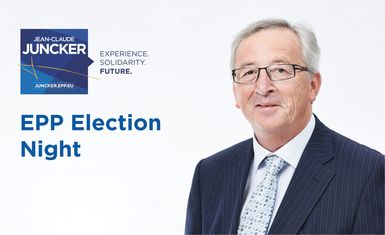 Sunday 25 May – Brussels, Belgium
Sunday 25 May marks the last day of voting across Europe for the 2014 European Parliament elections.

For the first time in the history of European integration, European political parties have nominated candidates for President of the European Commission who have been campaigning across Europe in the lead up to these elections.

The European People's Party (EPP), the party that penned the Treaty disposition allowing for the nomination of lead candidates, will host an election night at its Headquarters in Brussels on Sunday 25 May.

The EPP candidate for President of the European Commission, Jean-Claude Juncker, will follow the events from a location nearby and is expected to make statements at the Headquarters at an appropriate moment in time. He will head to the European Parliament once the Europe-wide results are known.

Throughout the night, a series of speakers from the "Juncker for President" campaign, the EPP and its member parties will make themselves available to comment on events as they unfold.

The EPP is happy to provide a working area with internet connection for a maximum of 100 journalists in the Stanhope Hotel, across the street from the EPP Headquarters.

Drinks and refreshments will also be provided for guests at the Headquarters.

Journalists wishing to attend are invited to register via this e-form: http://epp.org/RGmZ2T

Live satellite broadcast of the events will be available from 19:30 until 00:00 (see connection details below).

In addition, a special Election Night programme produced by EPP TV will be broadcast from 19:30 onwards. It will feature EPP President Joseph Daul; former Latvian Prime Minister and candidate Valdis Dombrovskis; Finnish Minister for European Affairs and candidate Alexander Stubb, among others, speaking from various locations across Europe. More information about the programme can be found here. The EPP TV broadcast will be live streamed from 19:30 onwards on http://www.epp.eu