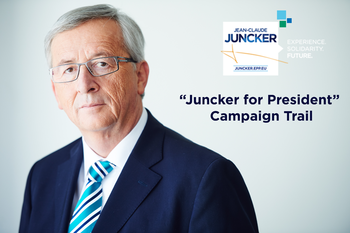 Saturday 17 May – Porto, Portugal
17:30: Jean-Claude Juncker visits Milaneza Factory, a Portuguese pasta factory and exporter; and meets the managers and workers of the company. Mr Juncker will be accompanied by Paulo Rangel and Nuno Melo, the two lead candidates of the Aliança Portugal electoral coalition.
The visit will be followed by a press point.
(Address: Rua Manuel Goncalves Lage 988, Aguas Santas 4425-12)

Nuno Melo is Vice-President of the Democratic and Social Centre – People’s Party (CDS-PP).

21:00: Jean-Claude Juncker debates on live TV with Martin Schulz (PES) about the future direction of Europe. The debate is hosted by the German TV station ARD on its programme Wahlarena.
Wednesday 21 May – Brussels, Belgium
14:00: Jean-Claude Juncker holds a press conference.
Prior to that, Jean-Claude Juncker will welcomes all the campaign vans of the Youth of the European People’s Party (YEPP), which arrive in Brussels after having toured Europe campaigning for Mr Juncker and having gathered messages from Europe’s youth to present to the EPP candidate.
This event will feature the Juncker for President campaign bus and the five YEPP campaign vans.
(Address: Place Jourdan, Brussels)
Thursday 22 May – Esch, Luxembourg
20:00: Jean-Claude Juncker delivers a keynote speech at a campaign event of the Christian Social People’s Party (CSV) of which he is a member. EU Justice Commissioner Viviane Reding, lead candidate of the CSV in the European elections, will also participate.